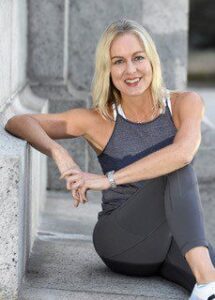 Bio – Cindy grew up in St. Louis, Missouri, with profoundly deaf parents, Viv and Joe Carrico, and three feisty hearing siblings. Viv enjoyed the art of dance, because she felt it was a way to “see” music. With Viv as inspiration, Cindy grew up dancing and became adept at choreography – bringing music to life. Cindy danced and choreographed her way through college at the University of Missouri (Mizzou) as the captain of a performance dance team,The Golden Girls. She also choreographed of a number of stage productions…a few of which were produced with Brad Pitt. Her experience working in theater taught her that anyone can dance – with the right choreography. 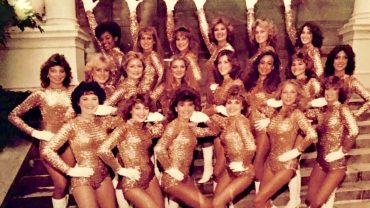 The Golden Girls, University of Missouri (Mizzou) circa 1985

Cindy’s passion for the arts evolved into a 20 year career in broadcast television as the host/producer of promotional television shows including, American Spotlight (Financial News Network), The Consumer’s Connection (Fox Television) and a variety of corporate and independent projects. As a producer, Cindy learned how to utilize music to manipulate emotions and drive home a story. This experience proved to be a uniquely valuable skill set as a fitness choreographer.

Having moved to the Philadelphia area with older kids and a husband who traveled extensively, Cindy felt the need to mix things up. In 2010, she combined her choreography, fitness and television production expertise to “produce” a music based, interval fitness class, Mojo Fitness. She started with a roomful of friends in a small dance studio teaching the traditional Zumba curriculum. Seeking a more HIIT fitness-focused regimen, Cindy created Mojo Fitness. Eleven years later, with only “word of mouth” advertising, Mojo has grown to an internationally recognized, award winning fitness regimen for all ages, rhythms and exercise levels.

How Mojo Fitness changed my life… 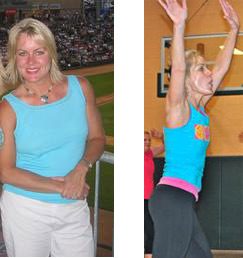 “Growing up as a dancer, I never had to “try” to stay in shape, so most exercise regimens were mundane and boring to me.

I was active and played tennis five days a week, but had gained 25 pounds since college and sported an unruly muffin top. After I started teaching four Mojo classes a week, I lost three sizes – and have kept them off. I’m sporting “guns”, and my energy level rivals any teenager.

Most importantly, I’m having a blast dancing with my Mojo friends all week long.” 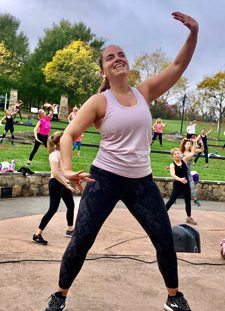 An ex-cheerleader with a razor sharp memory, Laura is a spit-fire who brings delicious energy to all our classes. Laura was not a fan of group classes, but is now addicted to the Mojo boost and gets antsy when her Mojo schedule is disrupted.

“The class flies by and I can feel it the next day. I hit muscles I didn’t know existed and it puts me in such a great mood!”

Laura is a no-drama, no-nonsense “Jersey girl” with three young boys.
She works with her hubby at their recruiting firm in King of Prussia and enjoys watching her sons’ sports, volunteering at school and hanging out with friends and family. 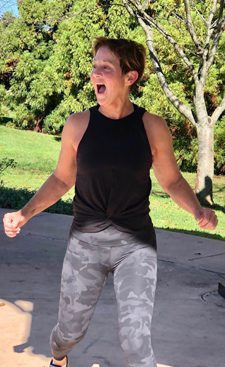 As one of our more “mature” specialists, Haidee is a fitness phenom and a wonderful example of how to maintain a youthful, muscular physique via a low-impact exercise regimen.

A former Jazzercise franchisee/ instructor for 7 years, Haidee is well-trained on how to burn calories and strengthen muscle tone without sacrificing your joints along the way.

Her secret to a lean and mean physique? “Don’t Stop!” There are always so many reasons to put exercise on the back burner. Don’t give in.”Haidee says her commitment to a healthy lifestyle has paid her back in youthful dividends.

Haidee’s passion to help others inspired her to become certified in health coaching. Whether the topic is weight management or increasing energy, she provides hands-on support for clients looking to lead healthier lives. Web site: Health By Haidee 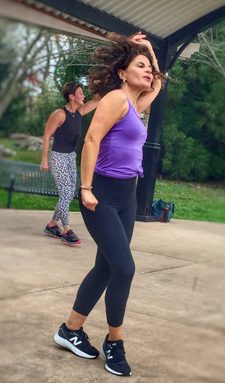 I’m thrilled to welcome Gema Arredondo (The “G” is pronounced with an “H”) to our Mojo Fitness crew.

Gema is Spanish teacher from Toledo, Spain (a stunning medieval town) and grew up studying flamenco dancing. While she loves Latin style dancing, when it comes to “exercise”, Mojo is her go-to.

“Mojo makes me work so much harder than most dance style workouts, but it’s still fun. I love how much stronger it has made me. I have muscle in my arms and in my curves. My husband likes cycling, Mojo is my ‘sport’. I love it!” 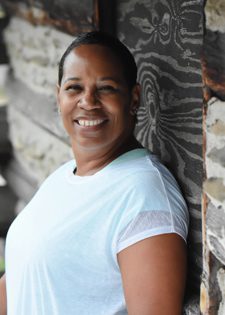 Deena has been mojoing with us since day one – 2009. While she’s a little on the shy side, she’s impossibly cool. She’s become a close friend we can count on to help boost the energy factor up a few notches. We need all the help we can get!

“My Mojo journey started when I was about to break 200lbs – and I was not going to let that happen. I was never one to exercise, because it was so repetitive and boring to me. I loved the way it made me feel. That’s when I started thinking differently. I found myself walking more and making better food choices at home, and the weight started melting off.”

“I find myself drawn to the wonderful energy of the music and the friends I’ve made through the years. If it wasn’t for Mojo I’d be over the 200 mark and I’m so thankful.” 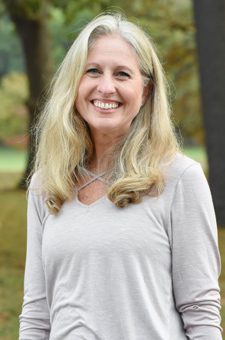 Accompanied by an enchanted blonde pony tail and a bubbly (infectious) energy, you’d never know Dolores was a systems engineer. Since joining our crew in 2010, Mojo has become a family affair she shares with both daughters, Rachel and Juliana – both of whom have appeared in our videos.

Since Dolores’ Mojo lifestyle began, she has lost 2 sizes and has kept it off. She’s enjoying a more taut midsection and continues to see new muscle groups come to life.

“I am an active person and I love the energy boost I get from the HIIT workout. The cardio is better than anything I have done before.  Cindy’s encouragement to focus on engaging core muscles and adding resistance to my motions make each class new and challenging.  The music is infectious and I am guaranteed to be exhausted and happy after each class!”